Some people find the weird noises and moving objects to be weird coincidences; others believe they’re the work of a ghost.

“I call him Henry,” said Matthews. “I don’t know why that stuck.”

The name, she said, has caught on with other students, and it’s not uncommon when something weird happens for Henry to get the blame.

Matthews’ most recent encounter with Henry occurred when she and some students were watching a baseball game on TV in the second floor lounge a few weeks ago. Some people freaked out when the TV sudden flipped back to channel 43.

Matthews was not one of them.

“I’m not scared,” said Matthews. “I just make jokes about it.”

Matthews finds her comfort in joking and often helps other students by praying with them, reading the Bible, talking about their problems, or just letting them stay in her room for the night. She has lived in Stella Russell since the fall of 2015 has taken on the role of big sister to the other people in the dorm in various ways.

“If any of the girls come to me needing anything I’d go out of my way to help, kind of like a big sister, because I know how it’s like not having anyone there for you when you need somebody to help,” Matthews said. “I understand people because most of my life I have never really had anyone else guiding me and telling me good job. That’s why I think it’s so important for me to tell other people that.”

One way Matthews does this is through being a member of the Ram Squad and going out to all the sports’ games.

“I try to have lots of school spirit,” she said. “Last week at the volleyball game, nobody was really there, and I was the only one really cheering for them. I really tried to bring them up because I have some friends on the volleyball team. I’m willing to go out there and make a fool out of myself.”

Matthews also supports Stella residents by baking for birthdays, fun occasions, and classes. She usually bakes enough to share with the whole dorm.

Stella’s RA, Junior forensic accounting major Anthony Harper II, has known Matthews since she moved into the dorm. He gave Matthews her first set of dorm keys, and continues giving her a hard time about everything from her love of the Dallas Cowboys to her baking.

“It’s good,” Harper said. “Sometimes I’m worried if it’s poisoned, but she does a really good job. She’s pretty famous for that. I know last year she had to build her reputation as a new freshman. You knew if Katie was cooking something it was going to be good.”

Beyond baking, Harper said Matthews has a reputation for being trustworthy.

“Besides all the goofy rivalries we have going on, she’s someone you can trust,” Harper said. “We know that when we hear a story from her it’s an honest one. She’s very caring and concerned for people around her.”

According to Dr. Eddy Lynton, one of Matthews’ professors, this caring also extends to the classroom.

“She’s an amazing student,” Lynton said. “She’s determined to build and she works well with her classmates. She’s very concerned about individuals, people, and I think that’s what makes her so special.”

Lynton thinks very highly of Matthews and admires her perceptiveness of people.

“There was a student that was giving a presentation. The student was really opening up about some stuff that they have never really ever talked about, and Katie saw that in that person. She went up to them afterwards, and they both started crying together,” Lynton said. “It was like the coolest thing in kind of a weird way, but it was so cool that she had connected with this person on that level. We get really wrapped up in our lives. In the criminal justice major, you just tend to see over and over the most negative sides of humanity, so to see something so warm, so cool, so real was really like a part of something special.”

Matthews believes that the negative sides of humanity found in criminal justice are something she can help change, at least for delinquent youngsters.

“I’ve gone through juvenile delinquency theory. It’s really eye-opening to how some people think that you can just lock these young criminals up and they will change,” Matthews said. “They don’t. They need to rehabilitate them because they are still young, and you can still change them, most of them.”

Matthews carries this passion toward her major because she can empathize. Growing up in Fort Worth, she had a rough childhood. Her father was the family’s breadwinner, but when he got sick when she was in high school, her mother had to get a job. The family struggled, and so did she, being bullied and made fun of while attending Brewer High School.

“When I was growing up, I did not come from the best home life. I did stuff to act out and cause trouble,” Matthews said. “A lot of people had just given up on me. Then there were others who really tried to help me. That’s why I’m so compassionate about children that come from an indecent home life and have to act out. They just are doing it for the attention. I really don’t think we should throw these kids off the side.”

“That poor lady. God bless her,” Matthews said. “She was so sweet. In my senior year, I went through so much, and she was just always there. I would go into her office every single day, and I would always expect her to think ‘Oh my God, here she comes again’ but she didn’t. She was so sweet. I’ve been in contact with her a couple years after I graduated high school.”

Matthews was able to move past her problems, both at the end of high school and into her college years.

“I think my senior year is when I really started blossoming and started making friends,” Matthews said. “I went to TCC and I don’t know what really happened. It wasn’t like high school. The people weren’t going to make fun of you because they knew you were different. Plus, I’ve gotten older now; I’ve gotten more mature.”

Harper believes the field of criminal justice is a perfect fit for Matthews.

“She already possesses those traits, and she’s the good type of people,” Harper said. “She’s always curious. She’s not going to take the simple answer. It’s why she’s investigative in those type of things. You know in criminal justice it’s important to make sure justice is served, and I feel like she’ll always seek that.” 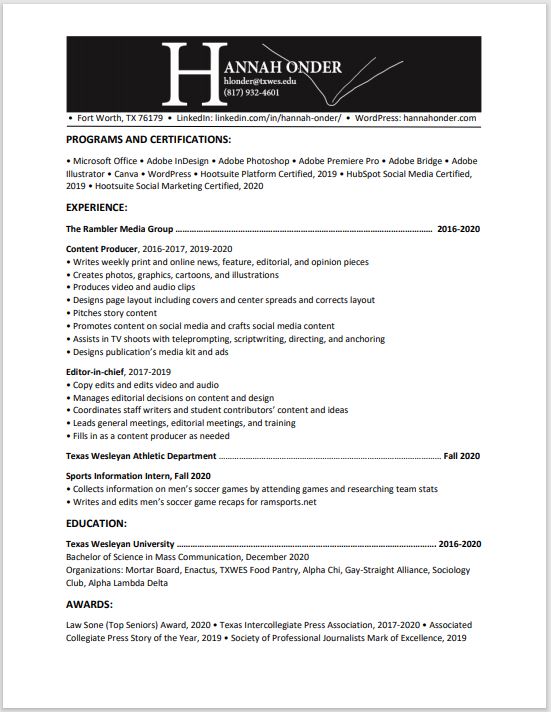